Edition of 100 pieces -
SKU
B02 PINOT
The 'Pinot' belongs equally on your neck as a pendant, in your pocket as a keychain knife, or in a museum. Blade is hand-forged 'Intrepid' damascus steel by Chad...
Read More
$1,250.00
Add to Wish List
Skip to the end of the images gallery

The 'Pinot' belongs equally on your neck as a pendant, in your pocket as a keychain knife, or in a museum. Blade is hand-forged 'Intrepid' damascus steel by Chad Nichols, and the handle is crafted from hand-forged & etched 'Twist' damascus steel, inlaid with wood from the original Eyrie pinot noir wood (the same vine that fathered the award-winning 'South Block' pinot noir of 1975). White topaz gemstone on 22" black box chain. (Optional 18", 20", or 24" chain by request) 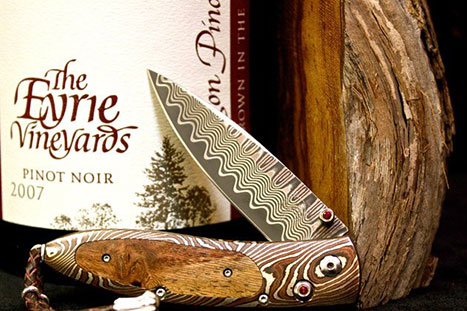