Edition of 10 pieces -
SKU
B05 RIP CURL
The Monarch 'Rip Curl' features a beautiful frame in hand-carved Mokume Gane by Lee Downey, inlaid with a mesmerizing scale in hand-carved mother of pearl. The blade...
Read More
$2,450.00
Add to Wish List
Skip to the end of the images gallery

The Monarch 'Rip Curl' features a beautiful frame in hand-carved Mokume Gane by Lee Downey, inlaid with a mesmerizing scale in hand-carved mother of pearl. The blade is hand-forged 'Hornets Nest' damascus by Mike Norris; the button lock and thumb stud are set with sapphires. The Monarch is a simple design that is easy on the eye and effortless in the hand; the elegant shape of the handle on this design is also an ideal canvas to showcase fine hand-engraving or exotic materials. The 'Rip Curl' is a stunning piece; a rich and unique synthesis of the elegance, function, and superlative artistry that are the hallmark of William Henry's work. 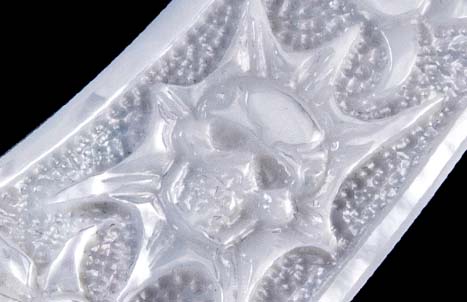 Mother of Pearl is the common name for iridescent nacre, a blend of minerals that are secreted by oysters and other mollusks and deposited inside their shells. William Henry uses premium mother of pearl material sourced directly from suppliers in Australia, selected for maximum color and figure. Most of our hand-carved mother of pearl is created in Bali by Lee Downey, who also works on most of our carved silver pieces.