Edition of 500 pieces -
SKU
B05 WMPC
The Monarch 'WMPC' features a beautiful frame in William Henry's signature (and patent pending) 'Wave' Mokume Gane, inlaid with a stunning scale in mother of pearl....
Read More
$1,000.00
Add to Wish List
Skip to the end of the images gallery Skip to the beginning of the images gallery
The Monarch 'WMPC' features a beautiful frame in William Henry's signature (and patent pending) 'Wave' Mokume Gane, inlaid with a stunning scale in mother of pearl. The blade is 'copper wave' damascus steel with an extra sharp core in VG-5 steel. The one-hand button lock and the thumb stud are set with opals. The Monarch is a simple design that is easy on the eye and effortless in the hand; the elegant shape of the handle on this design is a great place to show off exotic materials. The 'WMPC' also features 2 of William Henry's most admired and distinctive forged steels. 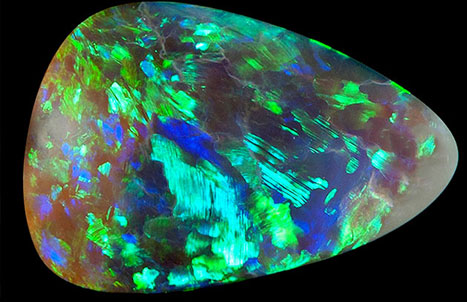 In ancient Rome, this gem symbolized love and hope. The Romans gave it a name—opalus—that was synonymous with “precious stone.”
Many cultures have credited opal with supernatural origins and powers. Arabic legends say it falls from the heavens in flashes of lightning. The ancient Greeks believed opals gave their owners the gift of prophecy and guarded them from disease. Europeans have long considered the gem a symbol of hope, purity, and truth.
Opal is considered an October birthstone; throughout most of history, it has been regarded as the luckiest and most magical of all gems because it can show all colors.