SKU
BB19 SAR
A little bigger and a little bolder, the ‘Highlight’ bracelet plays with two timeless forms – the sphere and the hourglass – to create a quiet statement...
Read More
Sizing Info
Add to Wish List
Skip to the end of the images gallery Skip to the beginning of the images gallery
A little bigger and a little bolder, the ‘Highlight’ bracelet plays with two timeless forms – the sphere and the hourglass – to create a quiet statement on the wrist that belongs to any and every time. Elegant Sardonyx beads are flanked by sterling silver hourglass spacers, built on a welded aircraft cable that will last for generations. Our signature sterling ‘arrow’ toggle clasp finishes it off in style. 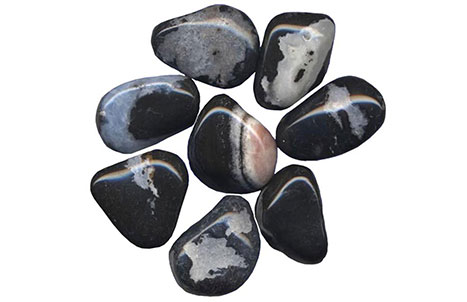 Sardonyx stone is a variation of onyx, which is a semiprecious stone of the silica mineral agate. The Sardonyx is a gemstone that has been prized for its beauty and rumored metaphysical properties for thousands of years. Its name is derived from the Greek words "sard," meaning a reddish brown, and "onyx," meaning veined gem.
Sardonyx is considered a highly protective stone that embodies a vibration of happiness, optimism and confidence. It helps to boost your self control and personal power.