Edition of 250 pieces -
SKU
C15 DELTA
Tough yet stylish, the Delta is all business. The blade is black DLC carbide coated S35VN, a state of the art alloy that holds a great edge. Shaving sharp, but...
Read More
$825.00
Add to Wish List
Skip to the end of the images gallery

Skip to the beginning of the images gallery
Tough yet stylish, the Delta is all business. The blade is black DLC carbide coated S35VN, a state of the art alloy that holds a great edge. Shaving sharp, but tough enough to handle any task. Housed in a solid aerospace grade titanium handle inlaid with crushed carbon fiber. Fittings are tempered stainless steel with inlaid smoky quartz gemstones. Includes a black titanium pocket clip. Sometimes the tool itself is the art. 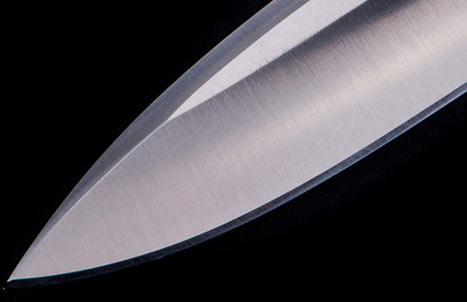 S35VN is a quality stainless steel manufactured by Crucible Industries’. The letters “S,” “V,” and “N” refer to the terms “stainless,” vanadium,” and “niobium,” respectively. S35VN steel is composed of 1.4 percent carbon, 14 percent chromium, 3 percent vanadium, 2 percent molybdenum, and .5 percent niobium. Carbon is the most essential element in the hardness of steel; the higher the carbon content, the harder the knife is. When combined with other alloys including chromium and vanadium, carbides are formed which are harder than just the carbon alone.

Despite the high level of toughness in this steel, which usually diminishes a steel’s wear resistance, this steel does not lose out on a superior resistance to wear and chipping. Combined with carbon, the niobium carbides make the steel more effective in providing resistance to wear and edge chipping than if it were more dependent on chromium, which is the case with many other steels. The resulting edge holding ability of this steel is remarkable, ensuring S35VN steel to be a long lasting one.