Edition of 500 pieces -
SKU
M1 TNA
The Geneva ‘TNA’ is a beautiful money clip featuring a frame in aerospace grade titanium, inlaid with abalone and white topaz. The clip is machined and polished...
Read More
$270.00
Add to Wish List
Skip to the end of the images gallery Skip to the beginning of the images gallery
The Geneva ‘TNA’ is a beautiful money clip featuring a frame in aerospace grade titanium, inlaid with abalone and white topaz. The clip is machined and polished from tempered stainless steel, with a beautiful engraving bright cut against the matte-finished background. The ‘TNA’ money clip is a beautiful, and functional personality statement featuring some of the unique materials and superlative artistry that are the hallmark of William Henry's collections; a timeless heirloom to be proudly worn and used for a lifetime before handing it down to another generation. 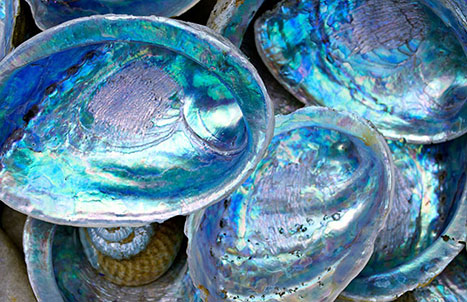 Abalone (from Spanish Abulón) is a rare shell found along the pacific coast of North America. There is a dwindling supply of shells large enough to create the scales we occasionally use in our knives, as these shells must exceed 7.5" in diameter. Most abalone trinkets are made from juvenile shells — these will not yield usable material for William Henry. A beautiful material when we can get it — all our pieces are cut from 'old stock' of harvested shells.