Edition of 100 pieces -
SKU
B30 CORAL WEB
The Gentac ‘Coral Web’ features a beautiful frame in etched 'T-Rex' damascus by Delbert Ealy, inlaid with a 'zinc matrix' apple coral. The blade is hand-forged...
Read More
$1,700.00
Add to Wish List
Skip to the end of the images gallery Skip to the beginning of the images gallery
The Gentac ‘Coral Web’ features a beautiful frame in etched 'T-Rex' damascus by Delbert Ealy, inlaid with a 'zinc matrix' apple coral. The blade is hand-forged 'Intrepid' damascus by Chad Nichols; the one-hand button lock and the thumb stud are set with spinel gemstones. An exceptional design that offers rigorous performance in a sleek, comfortable knife, the Gentac is also the perfect canvas to showcase William Henry’s range of exotic materials and techniques. The ‘Coral Web’ features some of the exotic materials and forged metals that are the hallmark of William Henry's collections; a distinctive personality statement to be worn and used for a lifetime. 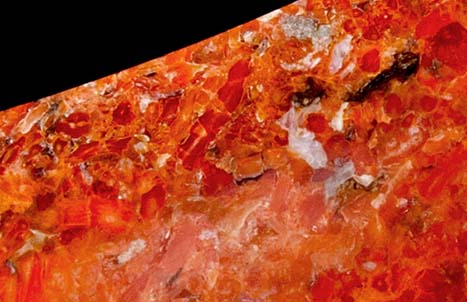 Apple coral is part of the species of corals known as melithaea sponge, which is commonly found on the ocean floors around the waters of Taiwan, Indonesia and southern China.

Also known as 'red coral' or 'tiger coral', apple coral that has been sealed and polished is usually a deep reddish color. When the apple coral is exposed to heat or intense sunlight for long periods, its striking color tends to lighten.

The destruction of coral reefs around the world led to a global ban on coral mining and collecting in 1992, but apple coral was not included, making it the only coral used by William Henry, aside from 100,000 year-old fossil brain coral which is also featured in our collections.